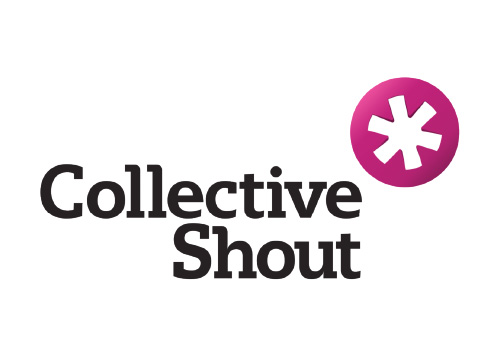 Collective Shout is a grassroots campaigns movement against the objectification of women and the sexualisation of girls.

Collective Shout is for anyone concerned about the increasing pornification of culture and the way its messages have become entrenched in mainstream society, presenting distorted and dishonest ideas about women and girls, sexuality and relationships.

Since we launched in 2010, we have achieved a huge number of significant wins: billboards objectifying women have been pulled down, inappropriate clothing for children withdrawn from sale, violent games banned, and other forms of sexualised advertising halted. Major corporations have joined our movement, pledging to reshape their practices for a world free of sexploitation!

This was all possible because thousands of people just like you decided to speak out and take action.

We are a grassroots campaigns movement – a Collective Shout against the objectification of women and the sexualisation of girls in media, advertising and popular culture.

To bring about cultural change and societal transformation through holding corporations, advertisers, marketers and media accountable for the objectification of women and sexualisation of girls and encouraging strategic social partnerships that uphold the value of women and girls.

We want to see a world free of sexploitation, where the objectification of women and sexualisation of girls is “unthinkable”

The page you requested could not be found. Try refining your search, or use the navigation above to locate the post.

Return to All Partners

Subscribe to our newsletter to receive all the latest news and updates delivered to your inbox.